jQuery is an open source, light weight, most popular JavaScript library that was developed for the sake of simplifying the interactions between an HTML or CSS document and JavaScript.

In technical terms, it was for simplifying interactions between Document Object Model (DOM) and JavaScript.

jQuery also helped in easing the usage of commonly performed JavaScript functionalities that had multiple lines of code into single line of code and also aided in performing AJAX calls in easier manner.

jQuery has the following features: 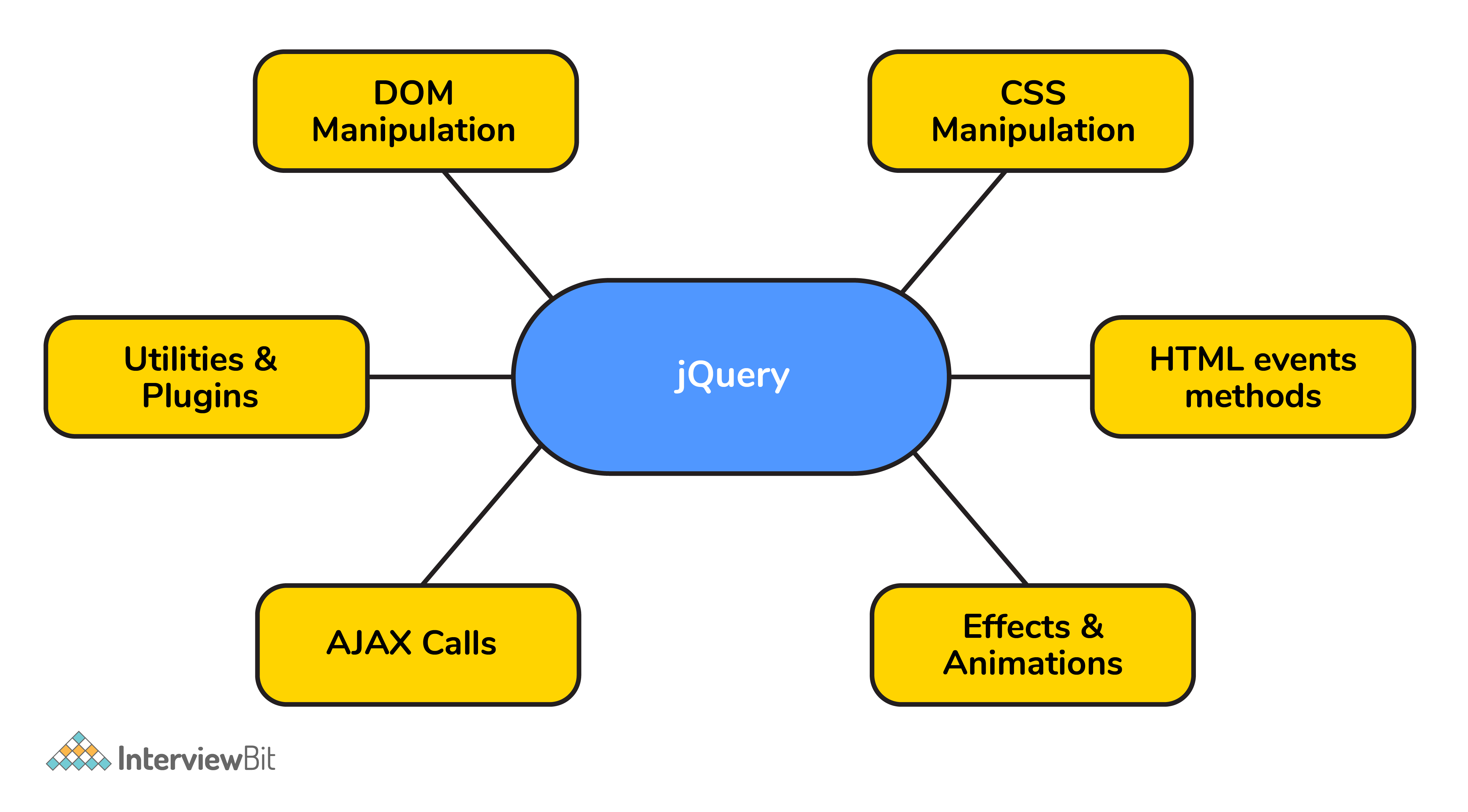 2. What are the advantages of jQuery?

3. Is jQuery a JavaScript or JSON library file?

4. Does jQuery work for both HTML and XML documents?

5. What are the jQuery functions used to provide effects?

Some of methods are listed below which provides the effect:

7. What are events in jQuery?

8. What is the significance of jQuery.length?

10. Can you tell something about jQuery each() method?

11. What is the difference between javascript and jquery?

In order to work with any element on the web page, we would first need to find it. Selectors find the HTML elements in jQuery. Some of the most commonly used and basic selectors are:

13. Explain how CSS classes can be manipulated in HTML using jQuery.

14. How to perform jQuery AJAX requests?

15. What does the following code do?

16. Consider the following code that exists in following HTML with the CSS:

17. What does the following code do?

18. Can you explain the difference between jQuery.get() and jQuery.ajax()?

19. Which of the two lines of code below is more efficient and why? document.getElementById("interviewBit"); OR $("#interviewBit");

20. Can you write a jQuery code selector that needs to be used for querying all elements whose ID ends with string “IB”?

21. Explain the .promise() method in jQuery.

22. Consider the below code snippet and assume that there are 5 <div> elements on the page. What is the difference between the start and end times displayed?

23. Can you tell the difference between prop() and attr()s?


Q1 - Which of the following is a single global function defined in the jQuery library?

Explanation: jQuery function is so frequently used that the library also defines the global symbol \$ as a shortcut for it. The \$ sign it’s just an alias to jQuery(), then an alias to a function which is used as a selector element.


Q2 - Which is code asks for the set of all div elements in a document?

In environments where you cannot guarantee that \$ will not be overwritten by something else, using jQuery or jQuery.noConflict( ) is safer than \$.


Q4 - Which method is used for parsing JSON text?


Q5 - Select the correct jQuery code to set the background color of all div elements to red?

Explanation: Only the class name is confusing, apart from that the selector is straight forward one.

Q7 - Which method is used to perform an asynchronous HTTP request?


Q9 - Which method is used to switch between adding/removing one or more classes (for CSS) from selected elements?

Q11 - What does the following selector select $(":disabled")?

Explanation: :disabled represents the disabled state of any element.

Q12 - Can the animate() method be used to animate ANY CSS property?

Q13 - $.foobar() is equivalent to which of the following below??

Q14 - What does the following lines of code do?

Q15 - Query.noConflict(true) is used to for?

Q16 - What is the phenomenon used in the below code?

Q17 - Select the correct options relating to the :odd and :even filters?

Q18 - Identify the difference between .width() and .outerWidth()?

Q19 - Which of the following code fetches the first span on the page, which has the class ‘grey’?

Q20 - What function is used to stop your jQuery for a few milliseconds?

Got suggestions ? We would love to hear your feedback.