Backend Developer Skills You Must Have

As a task for this article, we would like you to visit the website of Scaler Academy. Did you see something similar to this?

Notice the form at the right-hand corner?

Today, we use the internet in almost everything we do. The internet has infiltrated every aspect of our lives, ranging from booking tickets to meeting people virtually over a call. It now acts as a one-stop guide to all the information and queries about coding, cooking, relaxing, entertainment, and much more.

The internet itself has seen a transformation. In its early days, it was a static network designed to present information or static data visually with no involvement of backend and user-specific data. There was no way we could share dynamic data. But today, a vast quantity of data is uploaded and downloaded over this medium.

In the 1980s and 1990s, the internet widened in scope to encompass the capabilities of dynamic data sharing. It brought about the concept of web2.0 and the Backend that focuses more on user-generated data, thus making it more useful for general users.

With all this upsurge in technological advancements, we got exposed to a new domain known as Web Development. Web development is the building and maintenance of websites; it is the functionality that works behind the scenes to make a website look great and perform well according to the demand of the users. Web development has become an integral part of today’s digital world. It is a career that offers many opportunities to individuals with good technical skills.

Web development is mainly divided into two parts- frontend and backend. The frontend is all that the user sees i.e. the visuals and the designs. And the backend is all logic that makes things happen. Recall the first example that we encountered of the scaler website, all the functions you did like adding data and pressing the button were done on the frontend side, while whatever happened behind the scenes like collecting the data, processing it, encrypting it, adding that form data to the database was done on the backend side.

In this article, we will discuss more about the skills required to become a backend developer.

What is Backend Development?

Backend Development is also known as server-side development. It is everything that the users don’t see and contains behind-the-scenes activities that occur when performing any action on a website. It focuses primarily on databases, backend logic, APIs, and Servers.

Recall the example of the scaler website. What do you think happens when you submit your details? To give a brief overview, let us see the following diagram:

When you click the submit button after filling in your details, they are sent to the server that then processes your data and stores it in the database. Now we have the details shared by you in our database. But did you see any of this happening? No, because it happened behind the scenes. Thus, it is known as the backend. It is just an overview of what the backend is, but this is not it, there is a lot to it.

To become a backend developer, you should have good knowledge about these topics:

There are two kinds of backend programming languages –

Functional programming languages use declarative syntax, which suggests that statements are often executed in random order. Some examples of functional languages include Haskell, Clojure, SQL, and R.

One of the advantages of PHP is that it is easy to learn and use because of its simple syntax. PHP is a great language to start with for the following reasons:

Some of the companies that use PHP as a backend are Facebook, Lyft, Viber, and Hootsuite.

Python – Python was first curated by Guido van Rossum in 1991. Python is an interpreted general-purpose programming language. It declines the need for coding to a significant level.

It has high usefulness because of the ease of use and extensive libraries offered for backend development. Many emerging tech companies use Python web frameworks such as Django and Flask to power their web apps.

Furthermore, the syntax of Python is easy to understand compared to other backend languages. Python can be used for cross-platform shell scripting and quick automation. Using frameworks like a flask, we can also deploy machine learning models on the websites.

Some of the companies that use Python as a backend are Uber, Mozilla, RedHat, and Spotify.

Ruby is similar to Python in that it’s fantastic for prototyping. It prioritizes conventions rather than configuration, which helps the backend developers as they don’t have to waste their time configuring the files to get started with the development process. With ruby, we can automate repetitive tasks, build web applications, build mobile applications, and create prototypes.

Some of the companies that use Ruby as a backend are Airbnb, and Codecademy.

Java boasts of high convenience, cross-stage capabilities, and security. Thus, it has become the most preferred language among developers.

While Java is extremely popular with desktop and business software developers, it is not beginner-friendly. And thus loses in front of a language like Python. This is because Java is verbose and requires more code to build out even the simplest of the features. With Java, we can perform database connectivity, image processing, networking, etc. easily.

Spring Boot is one of the top Java backend frameworks used for efficient web development.

Some of the companies that use Java as a backend are LinkedIn, Flipkart, Amazon and eBay.

.NET – .NET is a web application framework that is used to build websites using languages like C#, VB.NET, and more. It was first developed by Microsoft in response to Oracle’s Java programming language.

.NET is a unified one-stop solution for building fast and robust mobile, desktop, web, and cloud applications. It is open-source, and supports all platforms including macOS, Windows, and Linux. .NET is fast and friendly and goes well with other programming languages and platforms.

.NET mainly follows an MVC (Model-View-Controller) based architectural pattern. It is a development pattern that allows duties to be handled by a controller, which interacts with a model to process data.
Some of the companies that use .NET as a backend are Stackoverflow and Microsoft.

Every website needs a database to deal with the client data. A database stores the data and site content in a way that makes it simple to recover, arrange, alter, and store information. A backend developer should have extensive knowledge of various DBMS technologies.

There are two types of databases available in the market – SQL, and NoSQL. A SQL database is one where the data is mapped in a table and each one is linked to another in a significant way. SQL databases work on queries and produce results based on them. The NoSQL database where, unlike SQL, there is no need to structure the data beforehand. NoSQL databases work essentially on JSON (JavaScript Object Notation) and XML (Extensible Markup Language).

The entire internet works via the medium of APIs. API stands for Application Programming Interface and API is a medium through which two computer software can talk to each other.

API is a set of rules and definitions that allow different clients, software, or services to communicate with each other over the internet. When two systems communicate, the server is the one that provides the API, and the client is the one who consumes it.

APIs take a request from the client or user and send it to the server, which then sends back a response based on the request.

This communication is done through HTTP methods such as:

Backend developers should have extensive knowledge about APIs since they are medium which enables data transfer. APIs generally act as a mediator between the backend and the databases enabling the developers to fetch the user data. Backend developers create APIs using various languages and frameworks including Python, NodeJS, etc. These APIs then can be consumed by frontend developers to collect the data, and show it on the frontend side of the website, and enhance the User Experience.

Every web application that you see today runs on a remote PC called a server. On the internet, the term “server” is commonly used to refer to the computer system that receives requests for web-based files which includes HTML, CSS, Javascript, etc., and sends those files to the client.

Since servers are the most commonly used medium to deliver important services, most servers are never turned off. This part of the servers makes it an essential element for a backend developer to learn about. Some examples of the servers are Apache, Nginx, IIS servers, and Microsoft IIS.

Some other backend development skills include –

What backend skills are in demand?

A backend developer should have knowledge about –

Roles of a Backend Developer

The web is a rapidly evolving universe. Everything that we use and see in our daily lives has moved to the web. With this upsurge in technology, the demand for backend developers is also rising. So if you are planning to give direction to your career, backend development is a good choice to have a thrilling and exciting career.

What is the difference between frontend and backend development?

Frontend refers to the user-facing, whereas backend refers to the server-side of a website or application. They are like two sides of the same coin. Though both are crucial to web development, they differ by their roles, responsibilities, and the environments they work in. The front end is simply what users see whereas the backend is how everything is working behind the frontend.

What should I learn to become a backend developer?

Backend developers should have sound knowledge of at least one of the backend and server-side programming languages. They must also know how to create, read, update and delete (known as CRUD operations) data from a database and communicate it to the user-facing side of the server. Backend developers must be proficient in handling APIs and the HTTP protocols along with version control systems like Git.

Is Python frontend or backend?

Being a general-purpose language, Python can be used as both frontend and backend. Due to its easy syntax and widespread use, Python is a core programming language for back-end development. There are many development frameworks built upon python including Django which can be used for both frontend and backend and Flask. Front-end Python is not unheard of, it’s just not preferred.

Which Language is best for the backend?

Every language has its own use cases, advantages, and disadvantages. And it depends on the developer as to which language he/she feels comfortable. However, some languages are preferred over others due to the ease of use and the community background behind them.

This graph shows the popularity of different programming languages –

Which is the easy frontend or backend?

There’s a general perception that the frontend is easier than the backend. This is true on a beginner level. In reality, mastering either of these two requires a lot of patience and hard work.

What is the backend developer’s salary?

According to payscale, the average annual salary of a backend developer is around $130K.

Java Developer Skills You Must Have 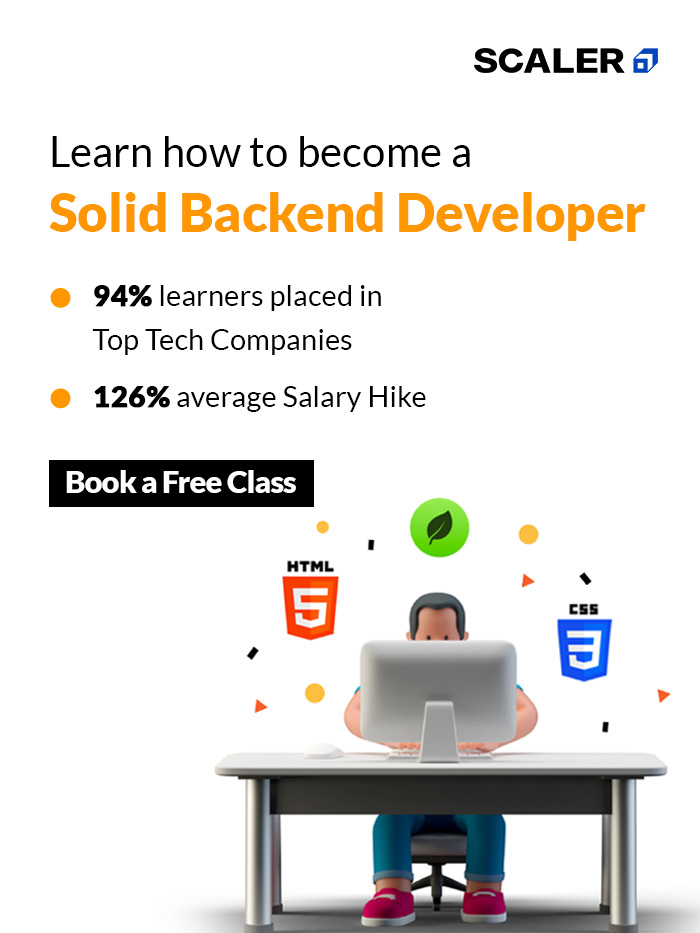