The basic purpose and idea behind such a data structure are to have a storing mechanism that provides a way for efficient sorting, searching, traversing, insertion and deletion operations.

Let us understand the basic operations in a binary search tree:

Case 1: Root of the tree is present, with no children.

When the root is present and has no children, then the next element to be inserted is compared with the value at the root node.

If the value to be inserted is greater than the value at root, it is inserted as the right child of the root.

If the value to be inserted is smaller than the value at root, it is inserted as the left child of the root.

Case 2: When no node is present, i.e., the tree gets its first node.

When there isn’t any node in the tree or the situation where the first node is to be inserted. No matter what the value is, the first element becomes the root node. All other nodes that are to be inserted after the first node, the insertion takes place according to Case 1.

Case 3: When root and its children are already present.

When the root and its children are already present, the next element to be inserted either gets inserted in the left sub-tree or right sub-tree. First, the element is compared with the value at the root node.

If the value is greater than the value at the root node, we proceed to the right sub-tree and follow the same approach of comparing the value with the first right child, followed by its left and right child.

If the value is smaller than the value at the root node, we proceed to the left sub-tree and follow the same approach of comparing the value of the first left child, followed by its left and right child.

This is done until one finds the right position for the value-to-be-inserted.

An example might come in handy for understanding the concept.

The next element to be inserted is 2. 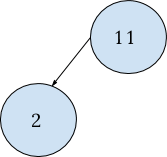 The next element to be inserted is 9. Compare 9 with 11. Since 9 is less than 11, it will proceed towards the left sub-tree of 11 until it finds its final position.

Now we compare 9 with the first element of the left sub-tree of 11.

The first element of the left sub-tree is 2. We compare 9 and 2. Since 9 is greater than 2, it will be inserted as the right child of 2. 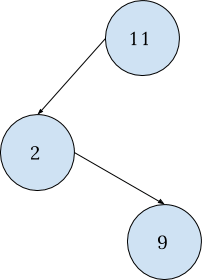 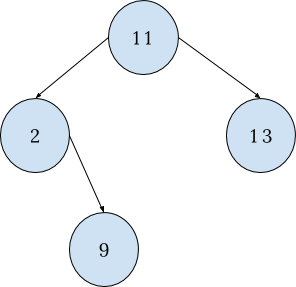 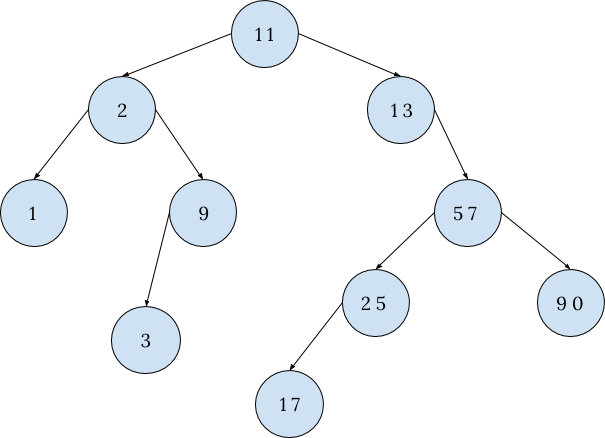 Deletion of any element from the binary search tree or any tree for that matter is a tricky business. The cases to consider for the element to be deleted are as follows:

Case 1: The element to be deleted is a leaf node. (A node with no children)

The removal or deletion of a leaf node does not affect the tree and its other functions as it neither has children nor does the parent has any effect due to the same thing. Use the search function to find the node to be deleted.

Once found, remove (delete) the node.

From the example quoted above, we delete the element 17.

We search for the element first starting from the root and continuing through its children till we find the node to be deleted.

After the node is found, we can easily remove it. 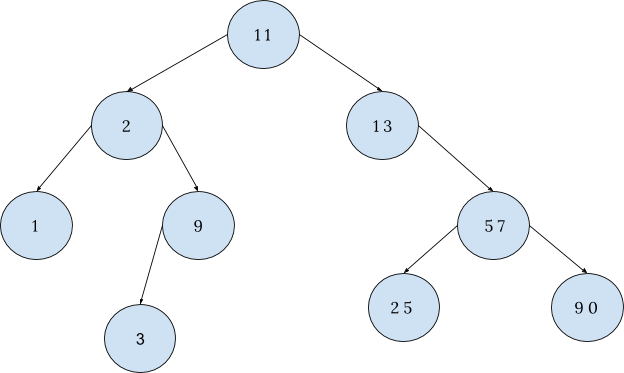 Case 2: Node that is to be deleted has one child

The child’s connection is first made with the parent of the node to be deleted and then the node is deleted.

If we’re to delete number 13, the picture below shows how: 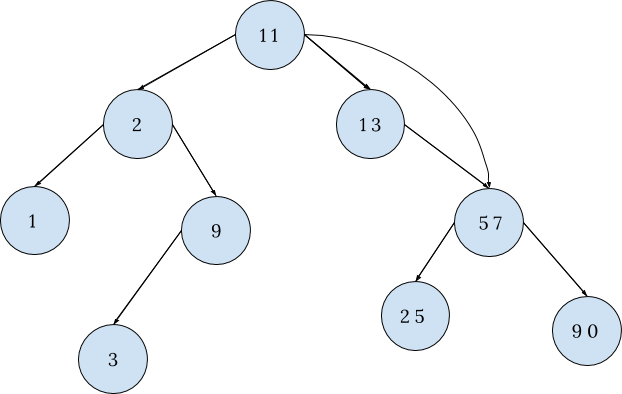 After the connection is made, 13 can now be deleted. The Binary search tree after deleting 13 looks like: 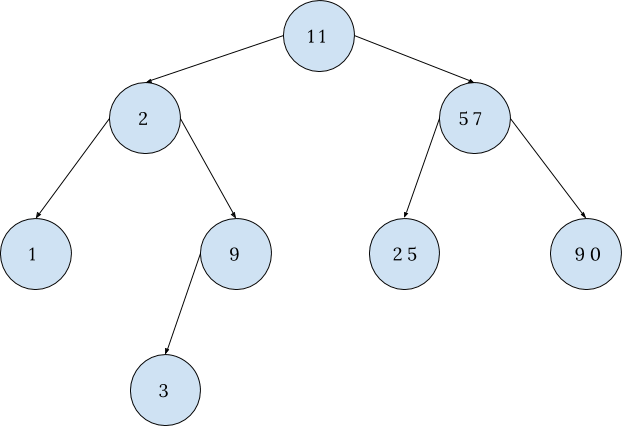 Case 3: Node to be deleted has two children.

The node which is to be deleted has two children, we find the node with closest value to the value of the node to be deleted. This value may be:

Now swap the values of the resultant node and the node to be deleted.

Look at the tree, if the structure and situation are either of the two cases, case 1 and case 2 respectively. According to the found case, proceed.

Here we wish to delete 2. Let us see how it is done.

The possible substitute would be either 1 (i.e., largest value in the left subtree), or 3 (i.e., smallest value in right subtree).

Since we have right subtree present, we may swap the node with 3. 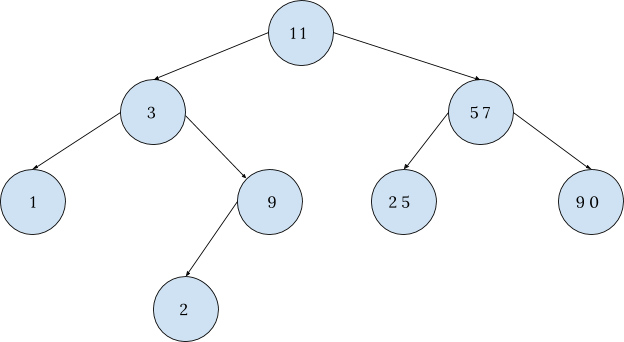 The diagram above depicts the situation described as under case 1. Following the steps as per Case 1.

We have the tree after deleting 2 as:

Traversing is the task of visiting all nodes of the tree at least once. The tree is not a linear data structure, hence there are many ways of traversing it. The three most commonly used traversing methods are:

1. In-order traversal: In this traversal mode, one starts visiting with the left child, followed by its parent and then the right child.

Start traversing from the first left child, which in our case is 2. Since 2 is also is a root, we move to its left child. Thus, the first number we traverse is 1, after which we move to its root that is 2 followed by the right child. The right child here is 9, but is a root and also has a left child thus we traverse to the left child 3. Coming back to its root we now visit 9. After this, we visit the root 2 which we've already visited. Thus move to its root 11. After this, we move on to the right sub-tree. The same approach is followed as we did for traversing the left sub-tree.

The order of visitation is as: start from the root, move to left child, then right child. Considering the same tree as in the diagram above, we start the pre-order traversal in the following manner:

We did this because 2 is a root and 1 is the left child of 2, and have followed the first two steps of preorder traversal. Now since 2 and 1 are the root and left child, show the next step would be to visit the right child.

The right child of 2 her is 9 but 9 is also a root. so according to pre-order traversal, we have visited the root now we shall visit its left child. The left child of 9 is 3. Thus, we have completed the traversal of the entire left subtree of 11.

Now we shall traverse the right subtree of 11.

Following the same approach, we will traverse the right subtree.

The order of visitation is as: start from the left child, move to the right child, and terminate at the root.

Considering the same tree as in the diagram above we start the post order traversal in the following manner:

Since we have completed traversing the entire left subtree of the root 11, we move on to the right child of 11 that is 13. In a similar fashion, we visit each and every node of the right subtree of 11 and then, at last, we come to the final root 11. 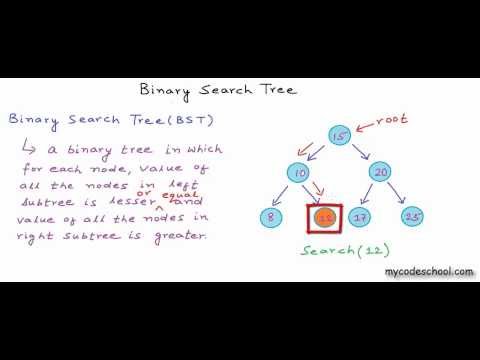