The algorithm was developed by a Dutch computer scientist Edsger W. Dijkstra in 1956. It is used to find the shortest path between a node/vertex (source node) to any (or every) other nodes/vertices (destination nodes) in a graph. A graph is basically an interconnection of nodes connected by edges. This algorithm is sometimes referred to as Single Source Shortest Path Algorithm due to its nature of implementation.

Before diving into any algorithm, its very much necessary for us to understand what are the real world applications of it. Majority of the problems that we encounter in real life scenarios deals with finding solutions to shortest path based problems. To explain in simple words, you want to travel from city A to city B. Both cities are connected by multiple routes. What route do we generally prefer? There is no doubt that we would opt for the route which can make us reach our destination with minimum possible cost and time! Isn’t this relatable?
Following are the main applications of Dijkstra’s Algorithm:

In order to find the shortest path, Dijkstra’s algorithm mainly allocates a “cost” value taken to reach the destination vertex from the source vertex. The “cost” can be mapped to disance, money or time taken to reach from source to a destination. 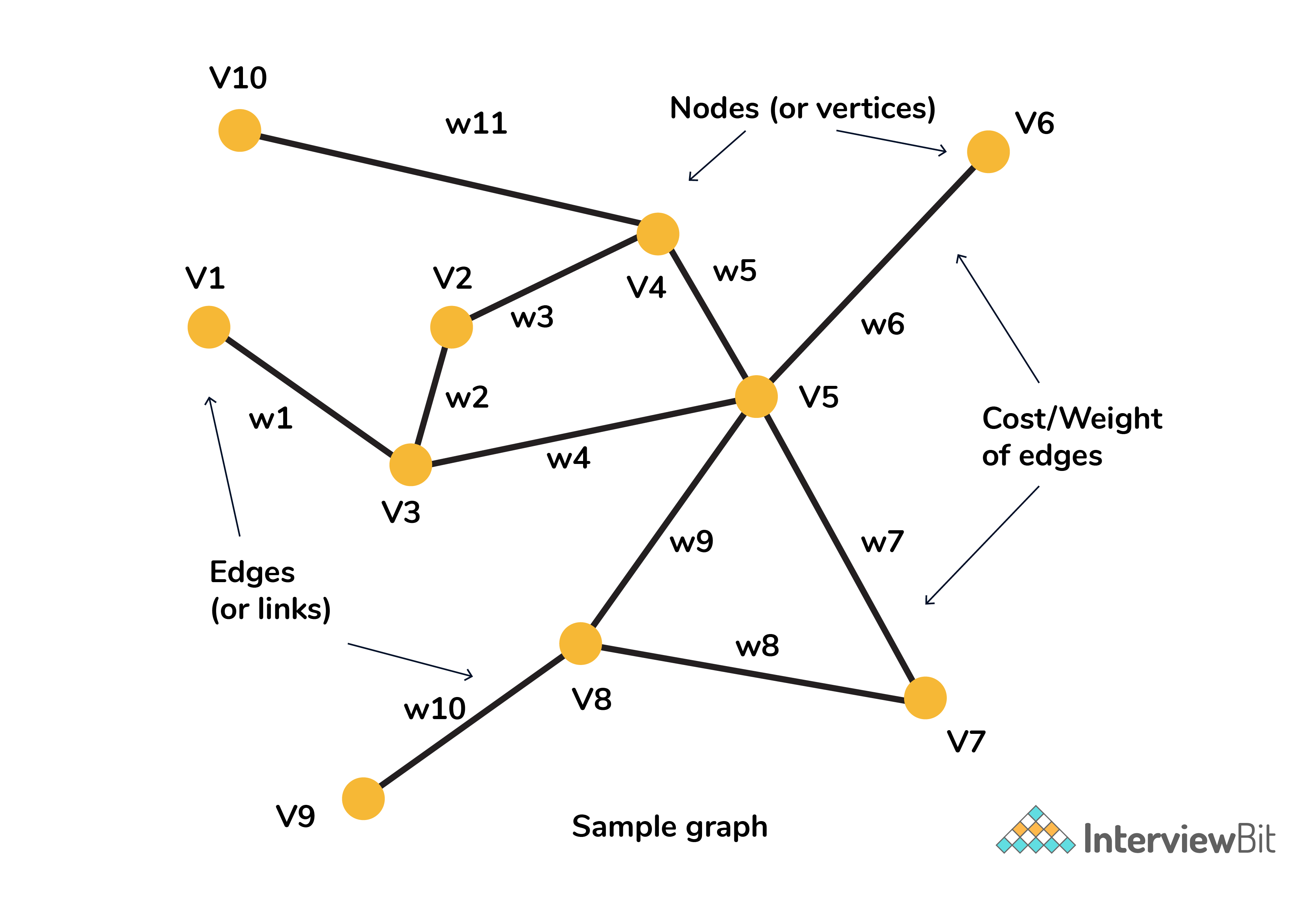 Below are the steps to be followed for solving using Dijkstra’s algorithm:

Consider the map below. The cities have been selected and marked from alphabets A to F and every edge has a cost associated with it.
We need to travel from Bengaluru to all other places and we have to identify what are the shortest paths with minimal cost from Bengaluru to other destinations. 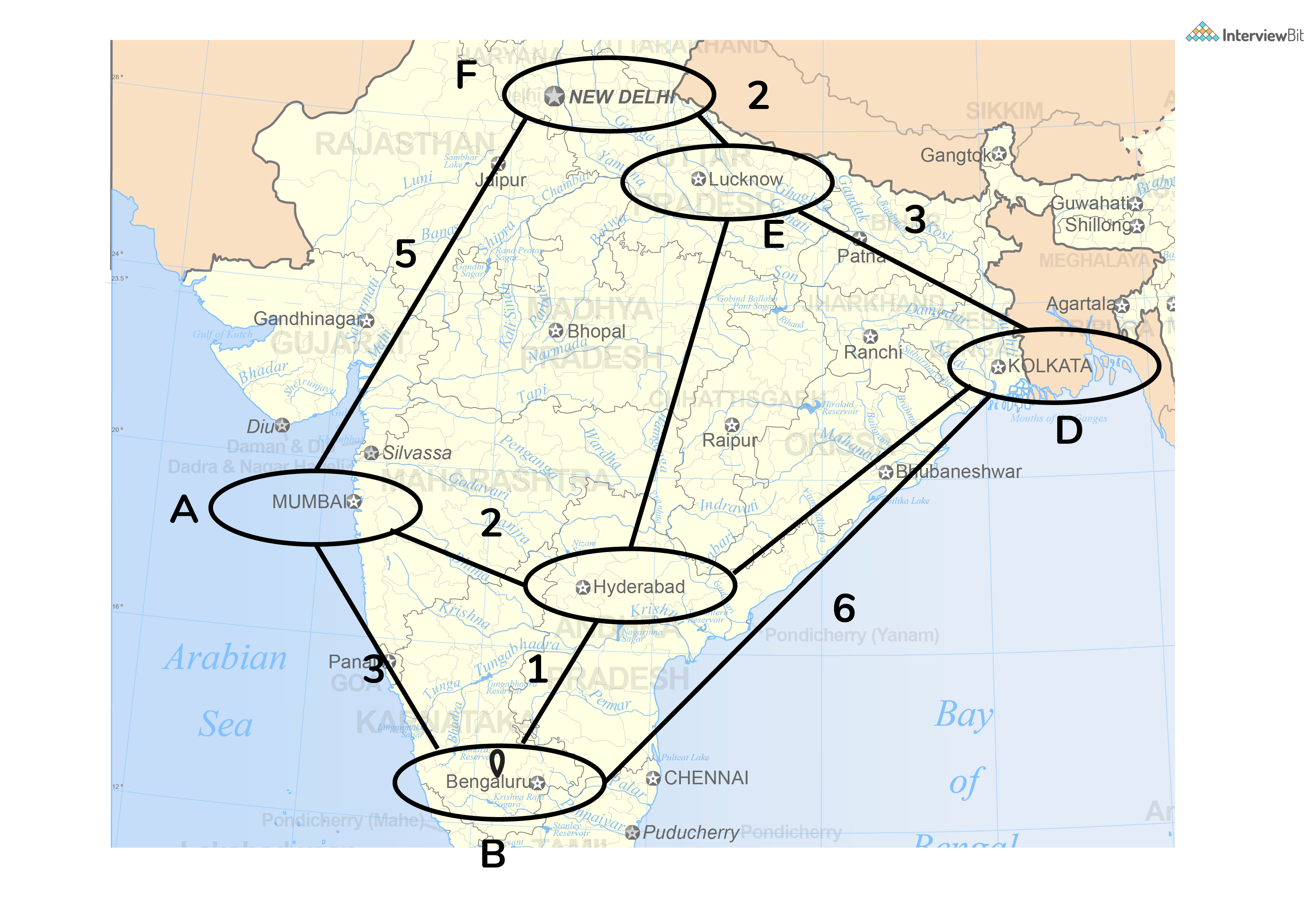 1. Convert problem to its graph equivalent.

Upon conversion, we get the below representation. Note that the graph is weighted and undirected. All the cities have been replaced by the alphabets associated with it and the edges have the cost value (to go from one node to other) displayed on it. 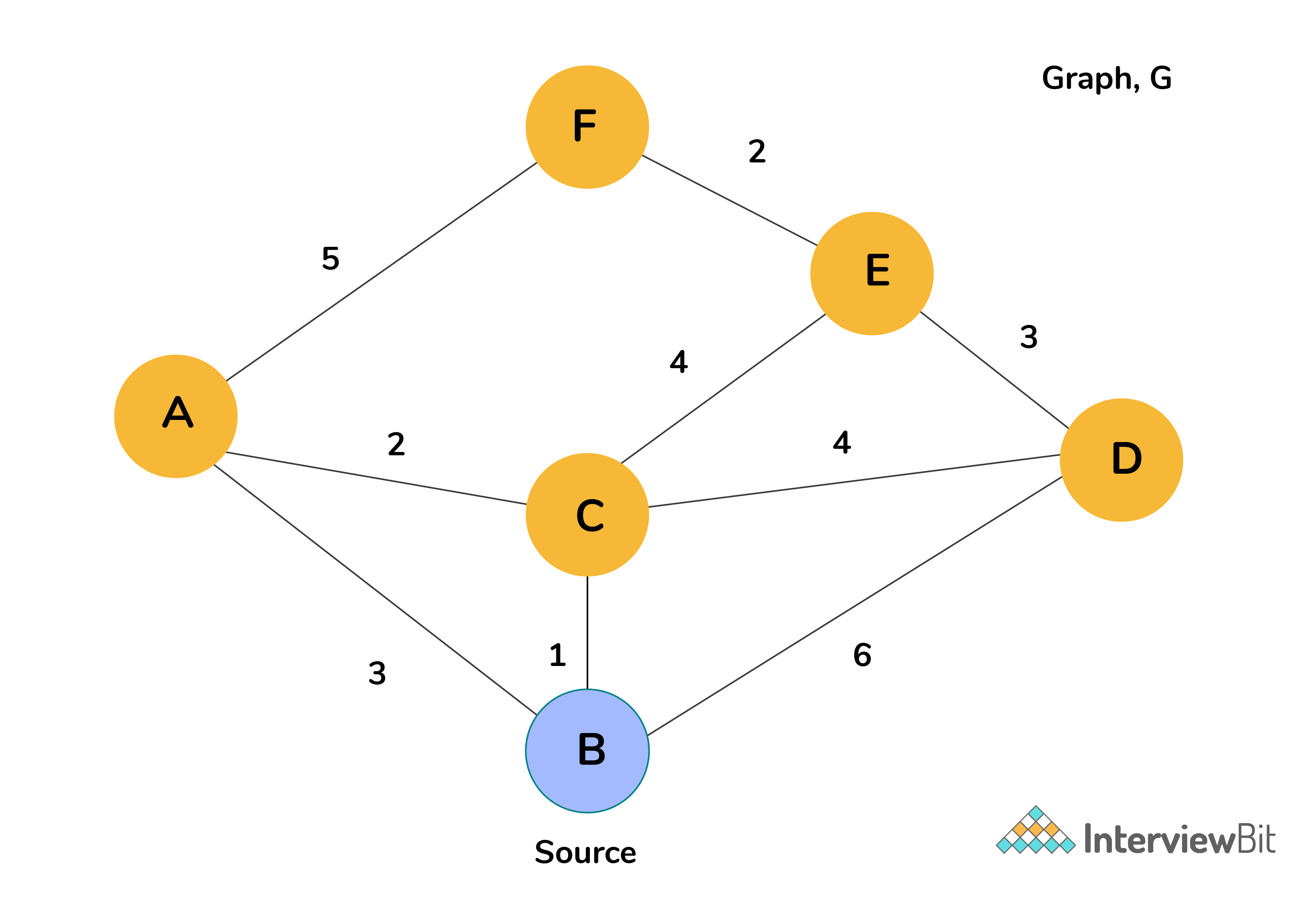 Assign cost of 0 to source vertex and ∞∞ (Infinity) to all other vertices as shown in the image below.
Maintain a list of unvisited vertices. Add all the vertices to the unvisted list. 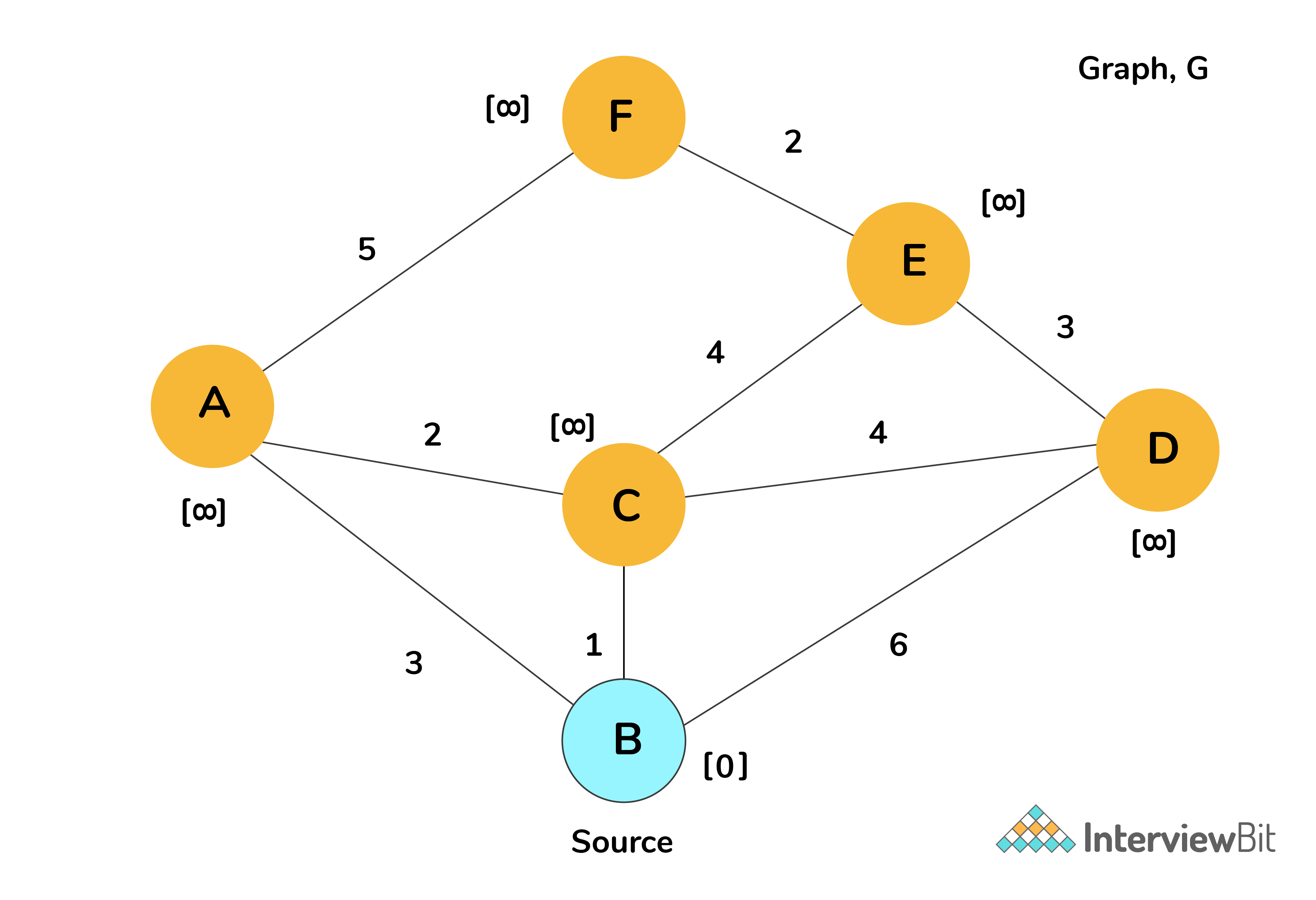 For each neighbor A, C and D of source vertex selected (B), calculate the cost associated to reach them from B using the formula. Once this is done, mark the source vertex as visited (The vertex has been changed to blue to indicate visited). 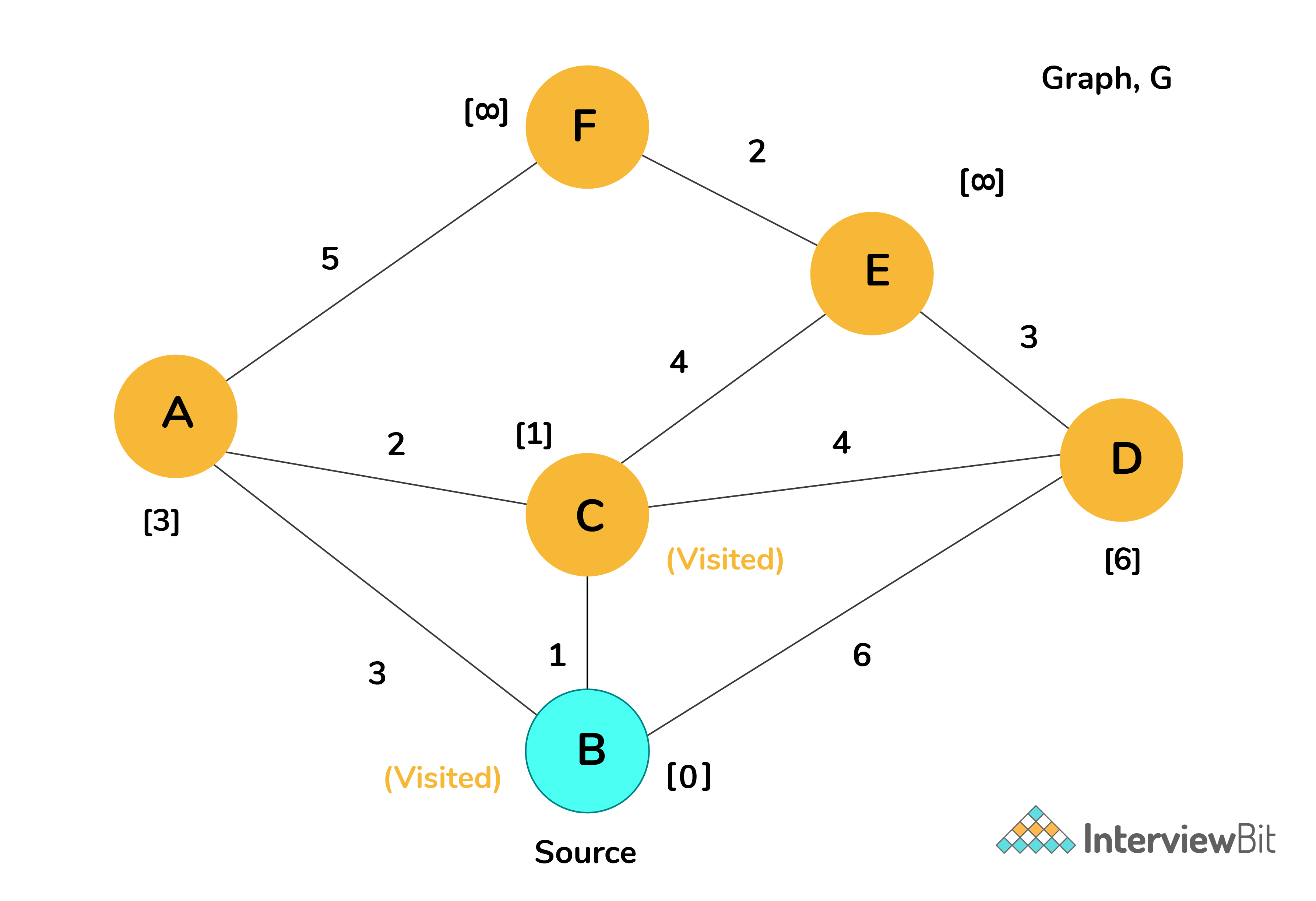 4. Select next vertex with smallest cost from the unvisited list.

Choose the unvisited vertex with minimum cost (here, it would be C) and consider all its unvisited neighbors (A,E and D) and calculate the minimum cost for them.

Once this is done, mark C as visited.

Observe that the cost value of node D is updated by the new minimum cost calculated. 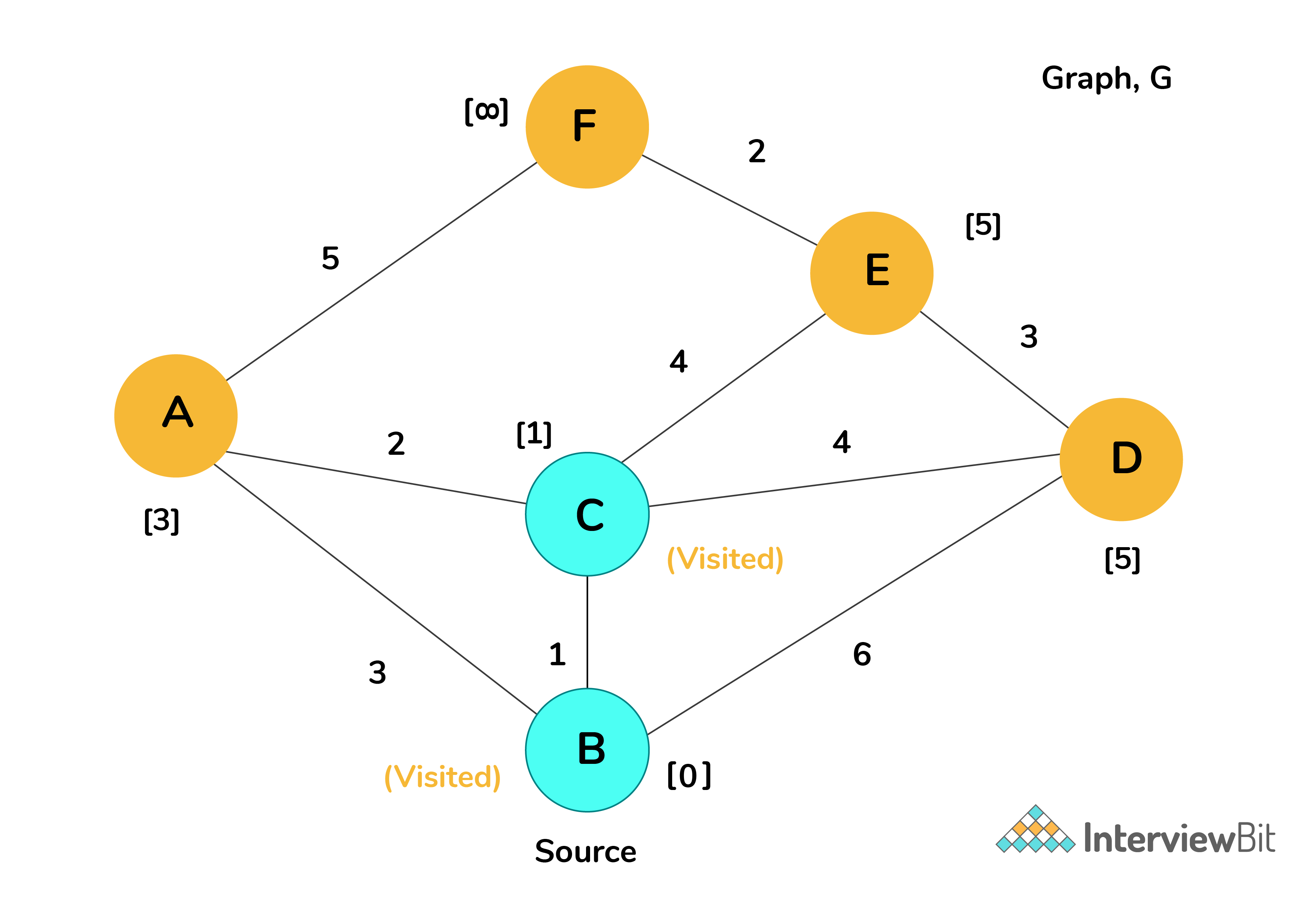 5. Repeat step 4 for all the remaining unvisited nodes.

Repeat step 4 until there are no unvisited nodes left. At the end of the execution, we will know the shortest paths from the source vertex B to all the other vertices. The final state of the graph would be like below. 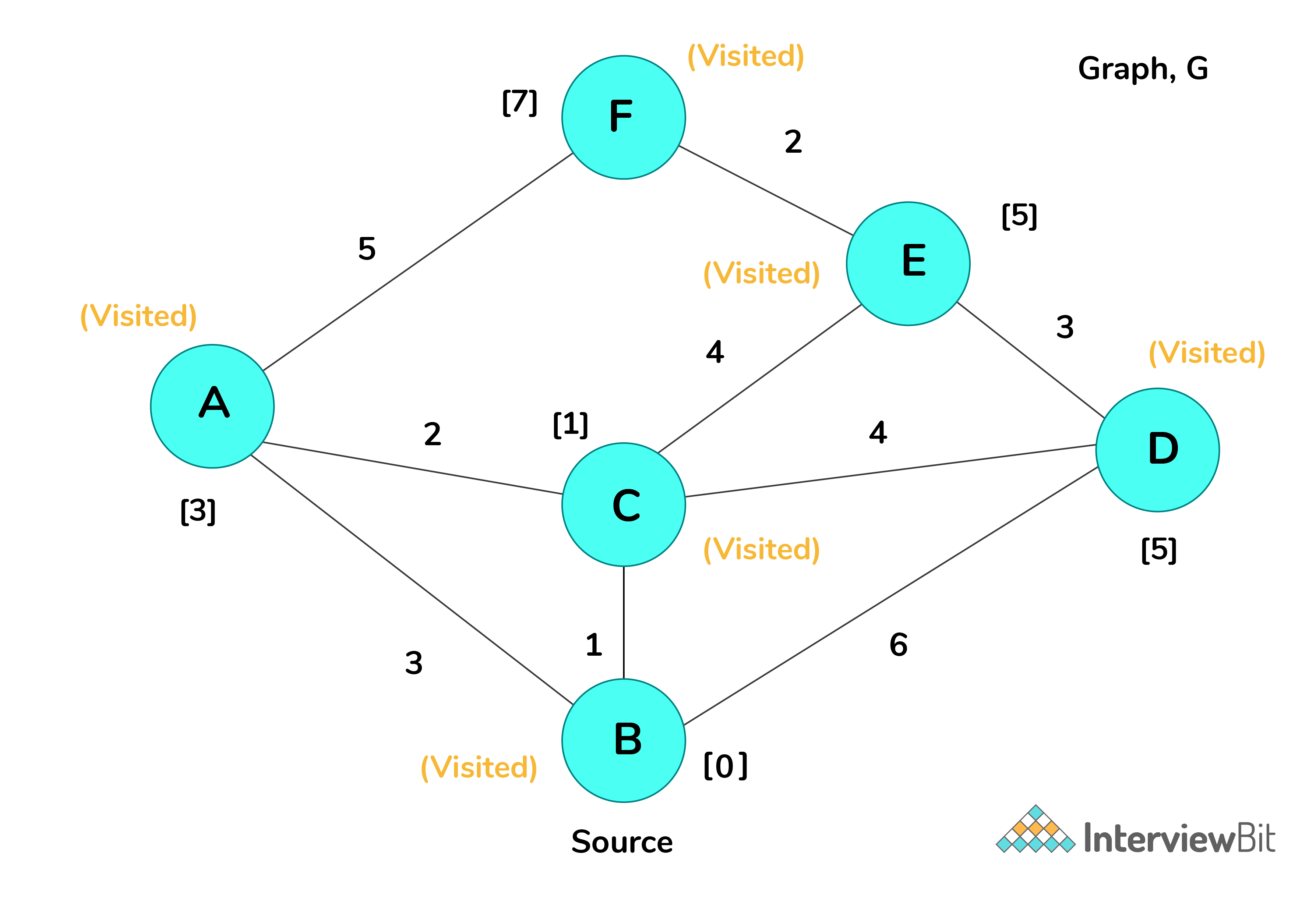 Consider there are V number of vertices in a graph. Then by definition, there would be |V-1| number of edges. 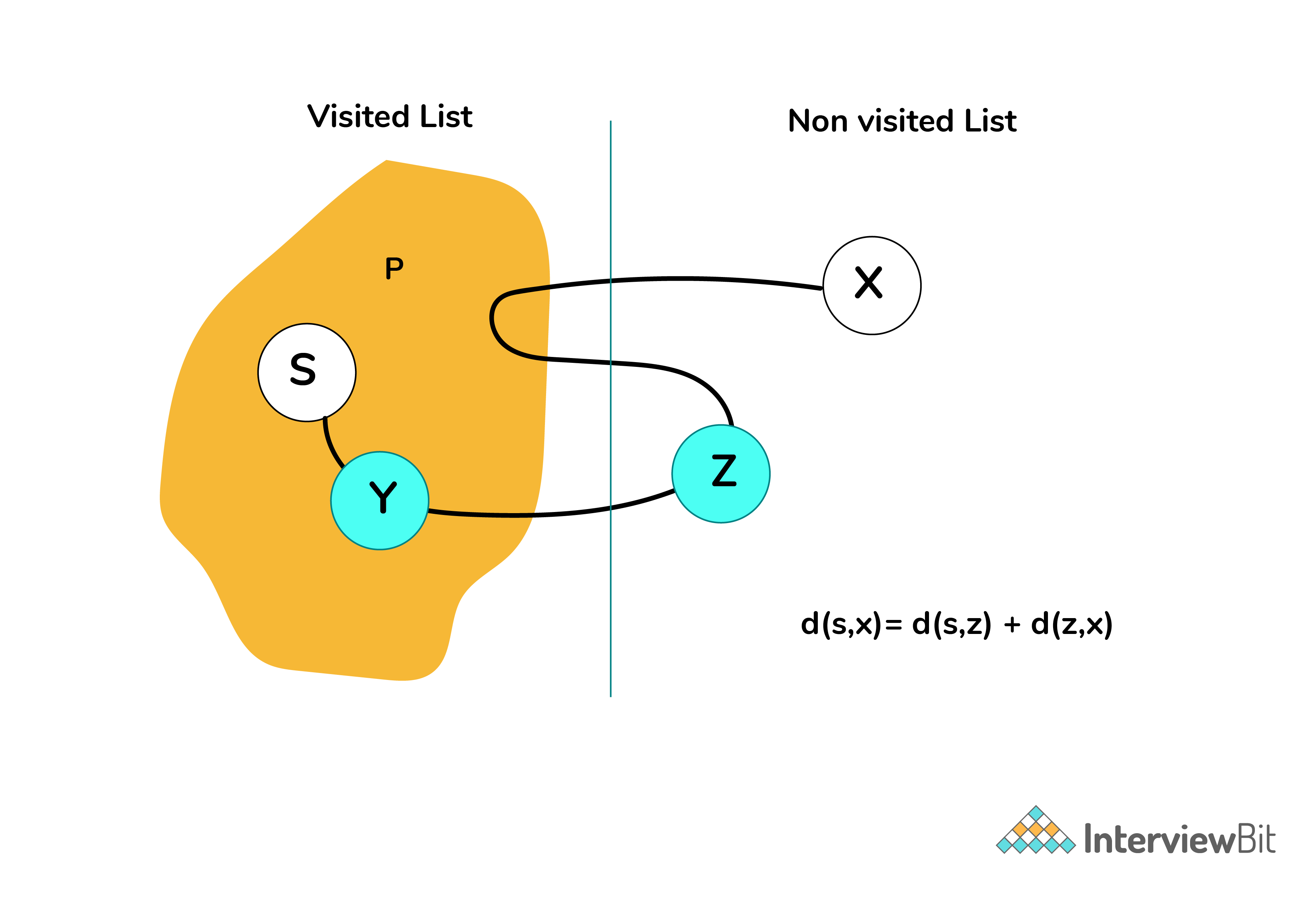